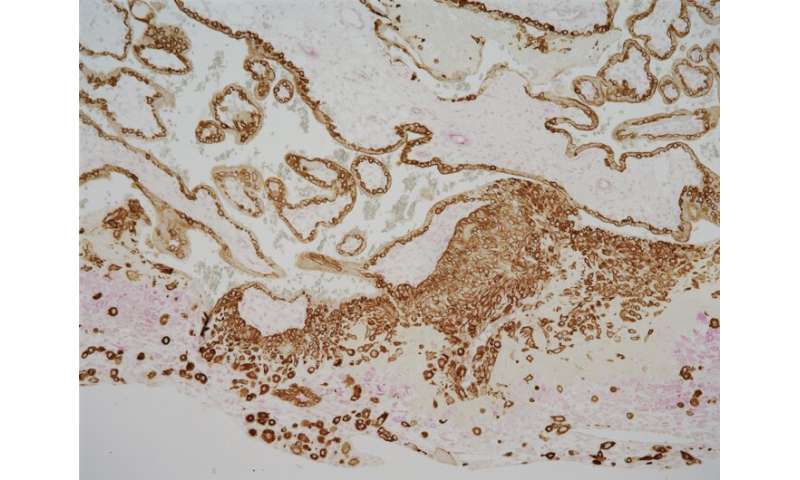 Abnormal formation and growth of the placenta is considered an underlying cause of various pregnancy complications such as miscarriages, preeclampsia and fetal growth restriction. Yet, much remains to be learned about molecular mechanisms regulating this blood-vessel rich organ vital to the health of a pregnant woman and her growing fetus.

The USF Health researchers used a powerful genome editing technology called CRISPR (shorthand for “CRISPR-dCas9) to activate all of the chromosome 19 microRNA cluster (known as C19MC), so they could study the gene’s function in early pregnancy. C19MC—one of the largest microRNA gene clusters in the human genome—is normally turned off and becomes expressed only in the placenta, embryonic stem cells and certain cancers.

But when cells from which the placenta arises (trophoblasts) were exposed to hypoxia—a lack of oxygen like that occurring in early placental development—C19MC expression was significantly reduced, the researchers found. This loss of C19MC function then freed the trophoblasts to differentiate from stem-like epithelial cells into mesenchymal cells that can migrate and invade much like metastatic tumors.

“We were the first to use CRISPR to efficiently activate the entire gene, not just a few regions of this huge gene, in human cell lines,” said the paper’s senior author Hana Totary-Jain, Ph.D., an associate professor in the Department of Molecular Pharmacology and Physiology, USF Health Morsani College of Medicine. “Our study indicates C19MC plays a key role in regulating many genes important in early implantation and placental development and function. The regulation of these genes are critical for proper fetal growth.”

Dr. Totary-Jain and others in her department collaborated with colleagues in the medical college’s Department of Obstetrics and Gynecology on the project.

The USF Health study offers new insight into how trophoblasts interact with the maternal uterine environment to become more invasive or less invasive in the formation of the placenta, said co-author Umit Kayisli, Ph.D., a USF Health professor of obstetrics and gynecology. “More research on microRNA expression and how it inhibits the epithelial-to-mesenchymal transition may help us better understand and control preeclampsia and fetal growth restriction, which account for 5-to-10 percent of all pregnancy complications and premature births.”

EMT happens early in the formation of the placenta, an organ which attaches to the lining of the uterus during pregnancy and supplies oxygen and nutrients from mother to the growing fetus. During the first trimester, fetal trophoblasts penetrate the maternal uterine lining and modify its blood vessels. This remodeling of the mother’s spiral arteries allows oxygenated blood to flow from the mother to fetus.

However, the trophoblast invasion prompted by EMT is a tightly coordinated balancing act. If the invasion is too shallow to adequately remodel the maternal blood vessels, preeclampsia and fetal growth restriction can occur. Invasion that progresses too deeply—beyond normal anchoring of the placenta to the uterine wall—leads to placenta accreta, a rare condition that can cause dangerous bleeding and often require pregnancy termination.

“You need the EMT process, but at some point it needs to stop to prevent adverse pregnancy outcomes,” Dr. Totary-Jain said. “You really need a balance between not enough invasion and too much invasion, and C19MC is important in maintaining that balance.”