Those of us who walk, dance, run, ease into a downward dog, or glide and churn on ellipticals at least a few times a week are much less likely to develop clinical depression than sedentary people, even if we inherited an elevated risk for the condition, according to a large-scale new study of exercise, genetics and mental health.

The study found that almost any type of physical activity, whether strenuous or light, helped to offset people's genetic propensity for depression, though the benefits were greater when people exercised more often. 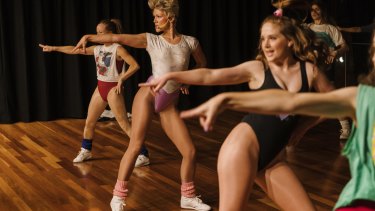 Just do it (like these 80s-loving exercisers at Sydney’s ‘Retrosweat’)… for three hours a week.Credit:James Brickwood

Depression is, of course, one of the world's most common mental disorders, affecting more than 300 million people globally, according to the World Health Organization. Some people experience a single bout during their lives; others face repeated episodes.

A growing body of research suggests that whether or not we develop depression depends, to some extent, on our DNA. The condition is known to run in families, and studies show that people who carry certain snippets of genes are far more vulnerable than others to depression.

More encouraging, other research indicates that exercise may help fight the condition. Multiple large-scale epidemiological studies link high aerobic fitness with lower risk for depression, while experiments involving people with depression show that exercise often lessens the length or severity of their bouts.

But few of these studies have burrowed into the types and amounts of exercise associated with mental health benefits or whether exercise helps prevent depression in people carrying high genetic risk.

So, for the new study, which was published this month in Depression and Anxiety, researchers at Harvard University and other institutions decided to look into those issues. They began by turning to a trove of health data gathered for the ongoing Partners Biobank study. It contains records for thousands of men and women in the greater Boston area who provided DNA samples and opened their electronic health records to investigators.

The researchers pulled the records of almost 8,000 of these men and women who had filled out a questionnaire about exercise habits. It asked them to recall how much time each week during the past year they had spent in a variety of activities. Those activities included walking, whether for exercise or transportation, running, biking, using exercise machines, or attending dance or yoga classes.

They also checked each person's medical records for codes indicating a diagnosis of depression, either before they joined the biobank or for two years afterward.

Then the researchers cross-checked all of this data and soon noted several interesting and consistent patterns. Perhaps least surprising, those men and women harboring a high genetic risk for depression were more likely, in general, to develop depression than volunteers with low risk scores.

Exercise buffered the risks, even for people born with a predilection for the condition.

At the same time, physically active people had less risk than people who rarely moved, and the type of exercise barely mattered. If someone spent at least three hours a week participating in any activity, whether it was vigorous, such as running, or gentler, like yoga or walking, he or she was less likely to become depressed than sedentary volunteers, and the risk fell another 17% with each additional 30 minutes or so of daily activity.

This link between movement and improved mental health held true for people who had experienced depression in the past. If they reported exercising now, their risk for a subsequent episode of depression fell, compared with the risks for inactive people with a history of depression.

Exercise also substantially altered the risk calculus for people whose DNA predisposed them to depression. If they carried multiple worrisome gene snippets but often exercised, they were no more likely to develop depression than inactive people with little genetic risk.

In effect, physical activity "neutralized" much of the added risk for people born with a propensity for depression, said Karmel Choi, a clinical and research fellow at Massachusetts General Hospital and Harvard's T.H. Chan School of Public Health, who led the new study.

Exercise did not erase the risk of depression for anyone, she continued. Some active people developed depression. But exercise buffered the risks, even for people born with a predilection for the condition.

This kind of observational study cannot show us, though, if being physically active directly causes people to remain mentally healthy, only that exercise and mental health are linked. It also relied on people's memories of how much they had exercised recently, which can be notoriously unreliable. In addition, it looked at preventing depression, not treating it.

Despite those caveats, the results suggest that "physical activity of many kinds seems to have beneficial effects" for mental health, said Dr. Jordan Smoller, the study's senior author and a professor of psychiatry at Harvard Medical School.

The findings also underscore that "genes are not destiny," Choi said. If depression runs in your family, she said, you might manage the risk by moving more.