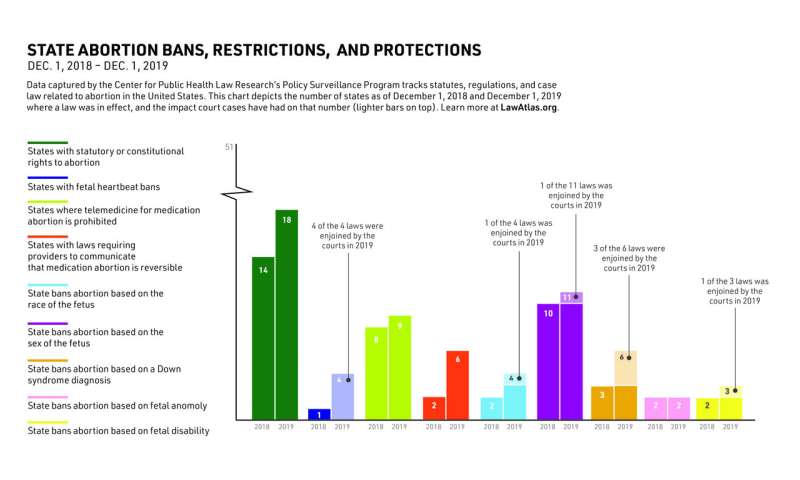 The landscape of abortion law in the United States saw increase in targeted restrictions in 2019, but also some efforts to protect access by state governments and courts, according to data published today to LawAtlas.org by the Center for Public Health Law Research.

The data capture abortion-focused laws passed in 2019 across 15 topic areas in effect between December 1, 2018 and December 1, 2019. These were either amendments to existing laws, or newly enacted laws passed by legislators. The majority of these laws were efforts by states to regulate abortion further:

“Abortion is currently the most regulated medical procedure in this country, and state legislatures were incredibly active this past year in enacting further restrictions on abortion,” said Adrienne Ghorashi, JD, a manager of the Abortion Law Project for the Policy Surveillance Program at the Center for Public Health Law Research. “Some of these restrictions were tested in the courts—and we also saw four states pass measures affirming the right to abortion.”

As of December 1, 2019, 18 states—a little more than one-third of all states—have passed statutory or constitutional protections for abortion.

“Tracking the case law and its impact on implementation and enforcement of the relevant abortion regulations in the United States provides a more complete picture of what is actually happening ‘on the ground,'” said Lindsay Cloud, JD, director of the Policy Surveillance Program at the Center. “This is important not only for practitioners and advocates to understand, but also for researchers seeking to evaluate the impact of these laws on the public’s health.”